Ferrets 2 years of age and older are commonly affected with dental tartar, gingivitis (gum inflammation), periodontal disease and frank dental decay. These problems are more commonly seen in animals fed moist (canned) diets, although even on a dry diet, tartar will accumulate as the animal ages. Regular brushing with dog or cat toothpaste can help control tartar, but many ferrets and their owners resist this practice. Most commonly, an annual dental cleaning done under gas anesthesia is needed to control dental disease. Chewing and gnawing on objects may help prevent the build-up of tartar, but these habits can lead to tooth damage, such as fractures (breaking) of the long canine teeth. Fractured tooth tips are not necessarily a problem unless there is exposure of the dental pulp. Tooth root abscesses can occur but are not common.

"Ferrets are very inquisitive and love to chew just about anything." 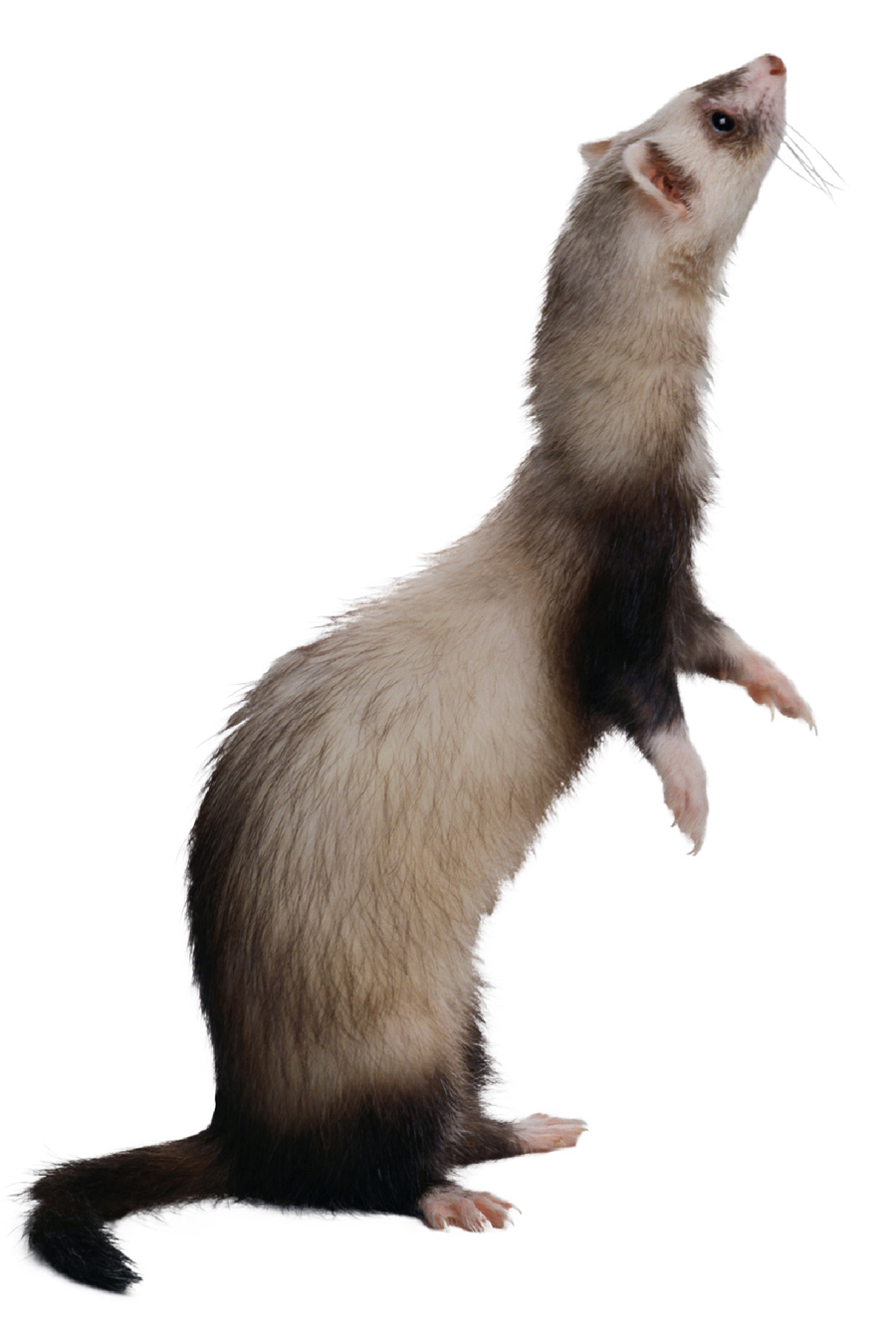 Ferrets are very inquisitive and love to chew just about anything. They often swallow rubber, foam or plastic objects. This is especially a problem in young inquisitive ferrets. In older animals, gastric (stomach) or intestinal obstructions are more often caused by hairballs or, rarely, by tumors. Blockages can occur in the esophagus (throat) but are more common in the stomach and intestines. The key features of a gastrointestinal foreign body are severe lethargy, anorexia (reduced appetite) with or without vomiting, reduced volume of feces, and diarrhea that is often dark green or black in color. Although one would expect vomiting to be the main sign, in many cases it is not. Foreign objects in the small intestine often cause pain and often your veterinarian can palpate or feel them relatively easily if your ferret is relaxed. Objects in the stomach cause less pain and are more challenging to feel by means of abdominal palpation. Due to the narrow diameter of the intestines, ferrets can, but rarely do, pass such foreign bodies.

Gastrointestinal foreign bodies may be difficult to diagnose without further testing. Plain or "survey" x-rays will usually be taken initially, but not all foreign bodies can be seen on plain x-rays. Often a "contrast" series will be recommended, in which your veterinarian will administer oral barium to your ferret, and then take x-rays at specific timed intervals after its administration. Barium will often show the site of obstruction from a foreign body, even though the object is not visible on x-ray. Exploratory surgery of the abdomen is often necessary to both diagnose and treat the problem, especially if caused by hairballs or a tumor. If diagnosed and treated early most ferrets recover from an intestinal foreign body obstruction and corrective surgery. Prevention is obviously preferred and ferrets must not have access to objects that can be chewed and swallowed. Ferret proof your house!

"Diarrhea is not a disease per se, but rather a sign of a gastrointestinal problem."

Diarrhea is not a disease per se, but rather a sign of a gastrointestinal problem. Diarrhea is liquid feces. In the ferret, there may be dark colored, green, mucoid, slimy, granular, profuse or scanty liquid feces, depending on the cause. Ferrets with diarrhea may not appear to be visibly sick at all, or may show anorexia, vomiting, weight loss, depression, lethargy and/or dehydration. In ferrets, several conditions can result in diarrhea. Internal parasites such as Coccidia and Giardia can be a cause of diarrhea, as can viruses such as rotavirus (seen in young ferrets in North America), Epizootic Catarrhal Enteritis (ECE is becoming more common in ferrets, typically in either very young or old ferrets) and, sometimes, human influenza or canine distemper (fatal in ferrets). Some bacteria such as Helicobacter musteli (a spirochete-type of bacteria), Salmonella, Campylobacter (proliferative colitis) and Clostridia can cause diarrhea in ferrets. Salmonella and Campylobacter are important zoonotic (can spread to humans) diseases.

Supportive veterinary care is essential in any case of diarrhea in these small mammals, since fluid loss can be fatal. Three other diseases, gastritis, proliferative bowel disease and eosinophilic gastritis are also characterized by diarrhea and are covered in more depth below.

Gastritis means inflammation of the stomach. In humans, Helicobacter pylori has been identified as a significant factor in stomach ulceration. In ferrets, Helicobacter mustelae has been similarly found to be associated with stomach ulceration and inflammation. This organism can cause ulcers with gastrointestinal bleeding. It is reported that almost 100% of ferrets have Helicobacter by the time they are weaned, but not all will become ill. Stress is a very important factor in the development of gastritis due to Helicobacter mustelae; stressors can include changes in environment and/or diet. This often occurs when young animals are moved from the mother to a pet store, and then to new owners. If these young, infected, stressed animals meet an older existing family pet ferret, that animal may become sick as well. Treatment for this disease requires a combination of antibiotics, together with gastrointestinal protectants and supportive care such as fluid therapy.

This condition is very similar to a disease with the same name in pigs and hamsters. It is caused by an organism called Lawsonia intracellularis. It is most commonly seen in young fast growing ferrets (10 - 16 weeks old) and certainly can be linked to environmental and nutritional stresses. Infection causes a thickened lower bowel, which results in chronic mucoid, green diarrhea and rectal prolapse. Indeed rectal prolapse in an older ferret is almost only seen in this disease. Affected animals should make a rapid recovery when treated with the appropriate antibiotics.

This condition is relatively common in ferrets. It is an inflammation of the stomach and intestine. Chronic diarrhea, with or without mucus or blood, is the classic symptom in these cases. While food allergy has been suggested in people and dogs affected with the same disease, no such link is obvious in ferrets. An elimination diet may be useful in the diagnosis of this condition. It can be a frustrating disease to treat

"Differentiation of the different causes of diarrhea and wasting can be difficult."

Differentiation of the different causes of diarrhea and wasting can be difficult. Supportive care is essential since these small animals are very easily compromised by fluid and nutrient loss. All diarrhea or gastrointestinal disorders must be brought to the attention of your veterinarian as soon as possible.

This client information sheet is based on material written by: Rick Axelson, DVM

© Copyright 2009 Lifelearn Inc. Used and/or modified with permission under license.