Aspergillosis is an infection, growth, or allergic response caused by the Aspergillus fungus. This fungus grows on dead leaves, stored grain, compost piles, or other decaying vegetation. The Aspergillus species includes more than 150 types of mold that occur widely in the indoor and outdoor environment. Aspergillus is commonly found as a lacy mold that grows on foods.

"Some molds can cause serious illnesses in people or pets with a weakened immune system, underlying lung disease, or asthma."

Although most of the molds are harmless, a few can cause serious illnesses in people or pets with a weakened immune system, underlying lung disease, or asthma. The most common species of Aspergillus to cause problems in dogs are Aspergillus fumigatus, Aspergillus terreus, and the recently discovered Aspergillus felis.

How did my dog get aspergillosis? 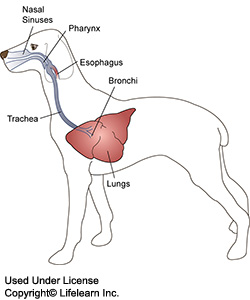 Aspergillus is considered an opportunistic pathogen, and usually affects animals whose immune systems are suppressed or compromised. Aspergillus fungi shed microscopic spores that float in the air and are easily inhaled. Fortunately, dogs have several protective mechanisms built into their bodies that help prevent infection. In the nose, these protective mechanisms include nasal sinuses to trap inhaled debris, the mucus layer that lines the nasal passages and traps debris, and the ability to sneeze and expel inhaled debris and foreign bodies.

In the remainder of the respiratory tract, the mucus lining of the passages traps debris that enters the airways, and tiny hair-like cilia that are constantly in motion 'sweep' the mucus and trapped debris up and out of the airways. A healthy immune system provides active protection of the entire body, preventing invasion and fighting infections within the body.

If Aspergillus spores, called conidia, are inhaled and able to evade or bypass these protective respiratory mechanisms, they can begin to grow and become more difficult for the body to remove. Some strains of the fungus are more likely to cause disease than others, or a dog may simply be exposed to a large number of spores that overwhelm its defenses.

What does it do to a dog and what are the clinical signs?

The two forms of aspergillosis affect dogs in different ways.

The less common and less invasive forms of nasal aspergillosis create an accumulation of mucous and fungus commonly referred to as a 'fungal plaque' or aspergilloma. A pet owner will observe a chronic nasal discharge ('runny nose') that often has a strong odor, lasts for weeks to months, does not respond to antibiotics or other common therapies, and typically involves only one nostril. Nosebleeds may occur intermittently and the edges of the nostrils are often rough, inflamed, and ulcerated (the tissue breaks open and bleeds due to the discharge, which is very irritating). Sneezing and pawing at the nose or face may also occur.

Many times the affected dog is of a breed with a long nose (e.g., Collie, Greyhound, Dachshund) although recent studies showed that Retrievers and Rottweilers have the highest incidence of aspergillosis infection. It is possible however, that the affected dogs lived in an area with high levels of pathogenic (disease-causing) Aspergillus. It is important to note that any dog can develop nasal aspergillosis.

Aspergillosis should be considered as a possible cause for any dog with a chronic or long-term nasal infection or condition.

In systemic or disseminated aspergillosis, the fungus enters the body through the respiratory tract and travels to other organs via the bloodstream, creating a more serious generalized or systemic fungal infection. According to some studies, German Shepherd Dogs may be predisposed to systemic aspergillosis.

"The clinical signs of systemic aspergillosis depend upon the location in which the fungus becomes established in the body."

How is aspergillosis diagnosed?

To diagnose nasal aspergillosis, at least two of the following four criteria must be met for most dogs:

General anesthesia is necessary for diagnostic imaging (X-rays or CT scans), as well as for rhinoscopy. In many cases, the advanced equipment to perform these tests is only available at specialty referral practices or veterinary teaching hospitals. In some cases, the yellow Aspergillus plaques can be seen within the nasal passages without specialized diagnostic equipment.

The diagnosis of systemic aspergillosis can be more challenging. Patterns of bone lysis (bone destruction) on X-rays or a CT scan may be suggestive of fungal infection.

Unfortunately, there is currently no blood test that is considered accurate enough to diagnose systemic aspergillosis outright, but blood tests can be used to support diagnosis of the disease.

In some cases, the draining fluid or a tissue sample may contain visible Aspergillus organisms. If the organism is not visible, it may be cultured from fluid or tissue samples.

How is aspergillosis treated?

Fungal infections in general require extended treatment and many of the drugs traditionally used to treat aspergillosis have toxic side effects. Advances in techniques and medications have enabled better success with the treatment of nasal aspergillosis, but systemic aspergillosis is still challenging to treat.

After anesthetizing the dog, an endotracheal tube (breathing tube) is placed in the trachea (windpipe), allowing the patient to breathe a mixture of anesthetic gases and oxygen. The area at the back of the throat is packed off with gauze sponges and an inflatable balloon catheter known as a Foley catheter. A 1% solution of clotrimazole or 1% bifonazole with enilconazole (topical antifungal agent), is infused into the nose and frontal sinuses and the nostrils are sealed. The solution incubates for an hour, during which time the patient is periodically turned to ensure the solution contacts all of the surfaces of the sinuses. At the end of the incubation period, the solution is suctioned or drained out through the nostrils.

"This treatment is highly effective with a high success rate, but some patients require several treatments."

This treatment is highly effective with a reported 86% success rate, although approximately one-third of patients require several treatments. In most cases, the nasal discharge will have resolved within 2-4 weeks. If there is still evidence of continuing infection one month after the treatment, another treatment should be performed.

If there is evidence that the infection has eroded through the bones of the nasal sinuses and has entered the brain, treatment with oral antifungal medication, such as itraconazole (brand names Itrafungol®, Sporanox®), fluconazole (brand name Diflucan®), or terbinafine (brand name Lamisil®) is required. Several months of therapy are needed and a 60% to 70% success rate has been reported.

Treatment is difficult for systemic or disseminated aspergillosis in dogs. Amphotericin B (brand names Abelcet®, AmBisome®, Fungizone®) is an older antifungal drug, largely replaced by newer antifungal drugs due to its high potential to cause kidney damage. Unfortunately, many of these newer drugs are less effective against aspergillosis. To reduce the damaging side effects to the kidneys, amphotericin B has been encapsulated in liposomes (microscopic fatty envelopes) or other lipid formulations; although they have been used in humans with some success, these formulations are extremely expensive. Initial treatment usually requires supportive therapy in hospital including intravenous fluids.

Long-term treatment (for months to years) with itraconazole (brand names Itrafungol® and Sporanox®) has proven successful in some cases. Systemic aspergillosis in humans has been treated with terbinafine (brand name Lamisil®) and voriconazole (brand name Vfend®), but there is very little research involving their use in pets. Newer antifungal drugs, such as posaconazole (brand name Noxafil®) caspofungin (brand name Cancidas®) have good activity against Aspergillus but have not been well studied in dogs.

What is the prognosis for my dog?

Can I get aspergillosis from my dog?

Birds are the most common source of infection in humans. While the potential to contract aspergillosis from your dog exists, it is less likely if you practice good personal hygiene, especially hand washing and avoid handling any discharges. If your dog has been diagnosed with aspergillosis, notify your physician for advice.