What is a tumor of the esophagus?

A tumor of the esophagus is an abnormal proliferation and dysregulated replication of cells anywhere along the esophagus, the muscular tube that connects the throat to the stomach. Esophageal tumors usually grow from the cells of the inner lining of the esophagus or the muscle that surrounds the lining.

Esophageal tumors may be either benign (non-cancerous) or malignant (cancerous). Malignant tumors are invasive and prone to metastasize (spread to other areas of the body). Most tumors of the esophagus are malignant.

What causes this cancer?

The reason why a particular pet may develop this, or any other tumor or cancer, is not straightforward. Very few tumors and cancers have a single known cause. Most seem to be caused by a complex mix of risk factors, some environmental and some genetic or hereditary.

In dogs, most cases of esophageal fibrosarcoma, osteosarcoma, and undifferentiated sarcoma are associated with spirocercosis. Spirocercosis is an infection caused by Spirocerca lupi, a type of roundworm found in tropical and subtropical areas. As each S. lupi worm settles into the wall of the esophagus, it causes an inflammatory nodule to form around it. These inflammatory nodules may eventually undergo malignant transformation to become a sarcoma. Other than spirocercosis, there are no known causes for esophageal tumors.

What are the signs of esophageal tumors?

The signs of esophageal tumors can vary and are directly related to the physical size of the tumor. As the tumor grows, it increasingly interferes with, or blocks, the passage of food from the throat to the stomach. As such, the signs usually come on gradually and are often not seen until the cancer is quite advanced.

You may notice that your pet has increasing difficulty, or pain, with swallowing, or starts to drool. There may be episodes of coughing or choking while eating. You may also notice what appears to be vomiting, but it is actually regurgitation (i.e. ejection of the contents of the esophagus, not the stomach). Eventually, as your pet’s ability to eat and general health declines, you may notice that your pet is losing weight and may stop eating altogether. With difficulties swallowing, choking episodes, and frequent regurgitation, there is a high risk of aspiration pneumonia. Signs of pneumonia include coughing, fever and nasal discharge.

How is this cancer diagnosed? 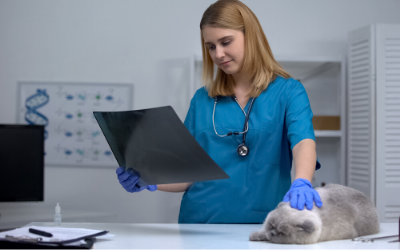 This cancer is typically diagnosed with various forms of imaging and an endoscopic or surgical biopsy. Chest radiographs (X-rays) may show the presence of a distended esophagus (megaesophagus) and/or an esophageal mass. If the X-rays shows air, fluid, or food in a distended esophagus, or a mass, your veterinarian may recommend more advanced imaging to see how the esophagus is functioning (e.g., fluoroscopy, a real-time X-ray movie) or to more clearly find the source of the problem (e.g., computed tomography or magnetic resonance imagining). Chest X-rays may also reveal evidence of metastasis (spread) to the lungs or aspiration pneumonia.

A definitive diagnosis of esophageal cancer may be made via endoscopy and biopsy. Endoscopy is a procedure that uses an instrument called an endoscope (i.e., a thin tube with a light and tiny camera at the end, and through which forceps can be passed to take tissue samples). The biopsies are then submitted to a pathologist to review under a microscope and determine the type of cancer. This is called histopathology. Histopathology is not only helpful to make a diagnosis but can indicate how the tumor is likely to behave.

"A definitive diagnosis of esophageal cancer may be made via endoscopy and biopsy."

Surgical removal of the tumor may be recommended if the endoscopic biopsy is inconclusive. In this case, If the tumor is benign, the surgery could be curative.

Occasionally S. lupi roundworm eggs are detected in the feces of dogs with esophageal sarcomas.

How does this cancer typically progress?

Most malignant tumors are locally invasive and metastasize to the nearby lymph nodes or to other areas of the body. Spirocerca-induced esophageal sarcomas metastasize most frequently to the lungs. Since there is a risk of metastasis, staging (searching for potential spread to other locations in the body) is highly recommended. This may include bloodwork, urinalysis, X-rays of the lungs, and possibly an abdominal ultrasound. If any lymph nodes are enlarged or feel abnormal, further sampling may be pursued to determine if spread is present.

What are the treatments for these types of tumor?

The treatment of malignant esophageal tumors is difficult at best because most of the time they are diagnosed at an advanced stage, when they have already metastasized. Radiation therapy of the upper esophagus (the neck-throat area) may be possible, but not the middle or lower esophagus (the chest area). Radiation generally tends to be of limited value with malignant tumors.

Benign tumors, such as leiomyomas, may be surgically removed via surgery. Prior to becoming cancerous, spirocercosis can be successfully treated with avermectins (a type of drug used to treat parasitic worms).

Is there anything else I should know?

Surgery of the esophagus is difficult and comes with potential complications. Benign tumors can be successfully removed with a good prognosis, but in most cases a prognosis of esophageal tumors is very poor.

"Surgery of the esophagus is difficult and comes with potential complications."

Occasionally palliative care may be an option with the placement of a feeding tube which are usually well-tolerated by pets and can be maintained for weeks to months with appropriate care.

This client information sheet is based on material written by: Debbie Stoewen DVM, MSW, RSW, PhD