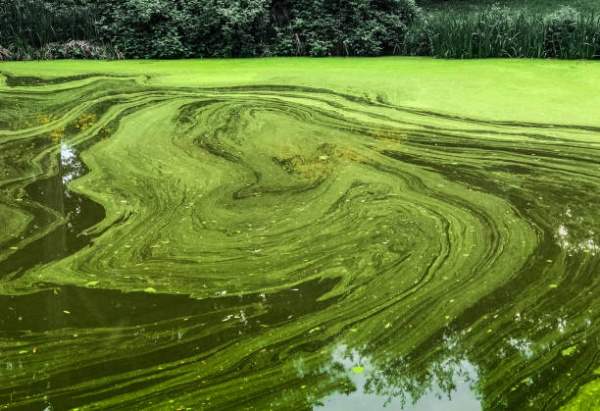 Does the water in your local lake have a blue or green coating on the surface? If so, that pond water may be covered with a floating layer of blue-green algae that can be deadly.

Although commonly referred to as blue-green “algae,” these organisms are not plants. Rather, they are bacteria—cyanobacteria, to be precise. Named for their bluish pigment, cyanobacteria are aquatic and photosynthetic, meaning they live in water and manufacture their own food.  Overgrowth of cyanobacteria can color the water green or blue-green, ranging from pea soup to iridescent hues. In some cases, they may produce colors such as orange/red or yellow/brown. Some bacterial colonies float on the surface and, on windy days, may be blown into concentrated algae-like mats along the shore where it is easy for livestock or pets to reach them.

Cyanobacteria are found in fresh, brackish, and saltwater. They are most common in standing bodies of water versus quickly moving streams and rivers. These microscopic bacteria can also grow in backyard fountains, garden pots, birdbaths, and anywhere water is stagnant. Regardless of where they are found, cyanobacteria can be dangerous.

Where are cyanobacteria found?

Cyanobacteria (“blue-green algae”) are present across North America. Overgrowth of these bacteria, referred to as a “bloom”, typically occurs during late summer and fall when the water temperature rises and there is little rainfall, although their growing season is much longer in temperate climates. Nutrient rich waters, such as areas of agricultural or municipal runoff, encourage cyanobacterial growth.

It is important to remember, however, that not all blue-green algae blooms are poisonous. Of the 2,000-plus cyanobacteria species only about 80 produce toxins. Unfortunately, it is impossible to determine whether or not a bloom contains toxins simply by looking with the naked eye. Therefore, all blue-green algae blooms should be considered toxic until proven otherwise. There are also many harmless types of algae that can appear similar to blue-green algae and differentiating them often requires professional testing.

What types of animals are affected by cyanobacteria?

All animals, including dogs, cats, horses, livestock, mammalian and avian wildlife, and humans, are susceptible to the toxins produced by cyanobacteria. The toxin enters the body when the animal drinks contaminated water, putting hunting and athletic dogs that swim in ponds at high risk. Other animals that commonly drink from lakes such as cows, sheep, goats, llamas, and horses can become ill as well. Pastured livestock that drink stagnant water from troughs may also ingest these toxins. Cats are susceptible to poisoning, but their risk of exposure is lower because they rarely swim and are pretty picky about the water they drink.

While adult humans are unlikely to enter contaminated pond water, unsuspecting children might and should be monitored closely. In addition to poisoning, humans may develop skin sores (contact dermatitis) from exposure to blue-green algae. If you notice red or irritated skin after swimming, call your doctor. People should also be careful when handling or cleaning animals that swim in contaminated water to avoid contact with blue-green algae.

What signs and symptoms can cyanobacteria cause?

Blue-green algae can produce hepatotoxins (liver toxins), neurotoxins (central nervous system toxins), or dermatoxins (skin toxins). The clinical signs of poisoning depend on which toxin is involved. Toxic components of the cyanobacteria in blue-green algae include microcystins, which affect the liver and anatoxins, which target the nervous system.

Hepatotoxins, such as microcystin, can cause liver failure within hours of an exposure. Many body systems depend on a functioning liver, so a broad list of issues arise when the liver fails to do it's job. For example, the gastrointestinal tract is affected resulting in vomiting, diarrhea, and tarry stool. When the liver fails, the animal becomes jaundiced, blood sugar and protein levels drop, and bleeding occurs due to the liver’s inability to produce important blood clotting components.

The liver filters toxins and metabolic by-products from the body. Failure to do so results in a build-up of toxins that may cause neurologic signs such as disorientation and seizures. The animal may develop symptoms of shock or become comatose. As the liver continues to fail and liver enzymes rise, death is imminent within days; however, some fatalities occur within 12-24 hours of algae ingestion.

"Neurotoxins...can cause signs of poisoning within 30-60 minutes of exposure..."

Neurotoxins, such as anatoxin, can cause signs of poisoning within 30-60 minutes of exposure and target the nervous system. Animals develop muscle tremors and rigidity, paralysis, cyanosis (lack of oxygen to tissues) and hypersalivation. Decreased oxygen delivery causes mucus membranes and skin to take on a blue tint. Paralysis of the diaphragm (also a muscle) results in respiratory failure and death.

With anatoxin exposure, death is quick, often within minutes to hours post exposure. In fact, livestock that drink from contaminated ponds are often found dead right by the water’s edge.

Dermatoxins, such as Lyngbyatoxin, can cause itching, redness, and blistering of the skin within hours of contact. These signs are not fatal, but may take several days to weeks to resolve, which is uncomfortable.

The following are clinical signs resulting from the most dangerous types of toxins:

What is the treatment for cyanobacteria poisoning?

Prompt treatment is important in all cases of poisoning, but since blue-green algae attack so fast, immediate intervention is critical. If you know your dog consumed potentially toxic algae, seek immediate medical care.

"Prompt treatment is important in all cases of poisoning, but since blue-green algae attacks so fast, speedy intervention is critical. If you know your dog consumed potentially toxic algae, seek immediate medical care."

The intestinal tracts of large animals are built differently than cats and dogs, so the induction of vomiting is usually not appropriate therapy for cows and horses. However, they may be given activated charcoal to help eliminate absorption of some of the toxin.

Regardless of species, the toxins enter the system so quickly that the animal is usually sick before reaching medical care. It is often too late to remove the toxin. Worse still, there is no specific antidote for blue-green algae poisoning. Treatment is limited to supportive care focused on affected organ systems.

What is the prognosis?

Despite aggressive treatment, the prognosis with blue-green algae toxicity is very poor. Some animals actually pass away before reaching a veterinarian. If you suspect that your animal was exposed, seek immediate emergency care.

What steps can be taken to prevent poisoning by cyanobacteria?

Fence off contaminated ponds and lakes to prevent livestock from drinking affected water. Provide fresh water sources in clean troughs for all animals.

Do not let dogs swim in contaminated water. Simply licking the water off the coat could be fatal. Remove standing water from plant containers, birdbaths, fishponds, and fountains.

Not all types of algae are deadly, but it is difficult to tell which are poisonous without specific analysis. It is safest to consider all algae blooms to be dangerous and avoid them altogether.

Pet Poison Helpline, an animal poison control center based out of Minneapolis, MN is available 24/7 for pet owners and veterinary professionals that require assistance treating a potentially poisoned pet. The staff provides treatment advice for poisoning cases of all species, including dogs, cats, birds, small mammals, large animals and exotic species. As the most cost-effective option for animal poison control care, Pet Poison Helpline’s fee of $65 per incident includes follow-up consultations for the duration of the poison case. Pet Poison Helpline is available in North America by calling 800-213-6680. Additional information can be found online at www.petpoisonhelpline.com

© Copyright 2021 LifeLearn Inc. Used and/or modified with permission under license.